Joe was a teacher, so he had the whole summer off from school too when I was a kid. Before he retired in 1960, we would travel around the Western United States for three to four weeks every year. He told me I should keep a journal of our trips, but I never did. Now, fifty years later, my memories of those trips resolve themselves into a series of images and memories, some vivid, some vague, in uncertain temporal order.

The first summer trip I remember taking with him was probably in summer of 1955, when I was 6 going on 7. Aunt Lorna, the sister of my father’s first wife, Kay, invited us to come visit her in Albuquerque. While some memories of that trip are vivid, my understanding at that age was pretty vague, so I have some trouble fitting them into a coherent whole. At six years old, I wandered in dream after dream, seeing animals and people and mountains in the clouds; staring at ceilings and wondering what it would be like to live in the upside down world where they were the floor, stairwells were interesting slides, and the thought of peering over the edge of the porch roof into the depths of the sky was awesome and a little scary.

By then I’m sure my father had told me some of his many stories of growing up on a ranch near Springer, New Mexico. Of his Airedale named Yellow Boy, who had a regrettable penchant for chasing badger, skunks, and porcupines, that led to interesting situations. He told me of his father, Charles Cunningham, who loved horses, always cut the cruppers off his harnesses, and wore spurs with smooth rowels made of silver dollars. So, with an invitation from Lorna and a place for us to stay, he decided it would be a wonderful opportunity to show me a little of where he was from and possibly catch up with old friends.

We bought a set of luggage for our trip consisting of two brown leather suitcases, a large one for him and a medium size one for me. Over the years they would become filled with decals from states, cities, and national parks along our way. We were to take the train from Union Station in downtown Los Angeles for our adventure. The Yellow Cab came to our door, the gentlemanly, uniformed cab driver stowed our suitcases in the trunk, we got in the spacious back seat of the yellow Checker, the driver turned on the meter, and we were off.

I loved Union Station downtown, with its church-like Mission Revival style architecture and Art Deco feel. While my father bought tickets for our trip, I sat in one of the sleek leather chairs in the waiting room, staring up at the intricately decorated ceiling, imagining what it might be like to climb around on that ceiling world. In later years, I was always disappointed that we seldom departed on our summer train trips from Union Station, instead picking up the train at Glendale Station, which was much closer to us. But I was fascinated by its architecture and the historical neighborhood around it. I remember other trips to that area at other times: get our shoes shined by a young Mexican shoeshine boy in the Plaza; briefly visiting the old Plaza Church, La Iglesia de Nuestra Señora Reina de Los Angeles; many visits to Olvera Street, where the candle-makers who showed you how they dipped their candles, and the glass-makers, especially the glass-makers, who miraculously sculpted their glass creations with their torches and dexterous hands in front of your eyes.

We went down the long passenger tunnels to board our Santa Fe train, the El Capitan, most of it gleaming stainless steel, with the red, yellow, and black Warbonnet design on the engine. A porter helped us aboard and we found our reclining seats, which I was a little surprised to learn we would be sleeping in, but at 6 almost everything is still new and an adventure. The El Capitan was an all coach car equipped with a dining car, a 2-level dome car for appreciating the scenery, and men’s rooms with stainless steel toilets you were not supposed to flush in stations and a roomy lounge with old guys gabbing around a spittoon I stepped in my first time through. I learned to get my sea legs on the rocking train, to pass through the twisty lurching connectors between cars that sometimes had open windows where the porters would stand.

My father regaled me with tales of other times he had passed through eastern California and western Arizona: Barstow, Needles, and Yuma. He always recalled that one time when he had a lunch stop at Needles, it was so hot that he couldn’t pickup the silverware without burning his hands. We rolled out through the suburbs of L.A., out past mountains, across the desert, into the night and Arizona.

When the train stopped late at night in Flagstaff, Joe woke me up to look at the beautiful sea of stars, the Milky Way, visible in the high, thin mountain air of Flagstaff, away from the light pollution of L.A. He talked about those stars for years afterward. He probably saw that sea of stars often when he was growing up Springer. I can only imagine that they must have been an integral part of his youth that he took for granted. Perhaps he never thought much about missing them in the smog and lights of L.A. until he saw them again that night in Flagstaff and memories came back to him.

I think Lorna lived in Albuquerque, but my geography was a little weak at that age. My attention was quite weak also. I didn’t understand much of what the trip was about. At that age, I became completely absorbed in microcosms and explored them through play. One of the highlights of the trip for me was finding .22 caliber bullet shells, shorts and longs, on the ground in various places; they were a complete novelty to me.

My father looked up old friends. One of them lived in a small, brightly painted house he had named La Casa de Colores. I don’t remember who he visited; some old guy and his wife I suppose. I do remember the house being a novelty that my father reminisced about later. I also remember that the highlight of the visit for me was finding and playing with half a dozen .22 bullets shells there in the rocky gravel driveway. I also remember playing with them on polished wooden floor, near the floor register of the heater, in Lorna’s house.

At some point, we drove up to Taos with Lorna, a very long drive through very big mountains. When we got out of the car at Taos, my father was scandalized that one of the old Indians, who had dressed up in full regalia for the tourists, wanted to charge him a dollar to let him take his picture. He thought that was highway robbery and would have none of it.

I remember making two stops somewhere on the way up to or back from Taos. We stopped to look at an old church. Perhaps it was the San Francisco de Asis Mission Church in Rancho de Taos. We went inside, looked around, and talked to someone there. He showed us that there were trap doors in the floor near the altar leading to an archaeological excavation beneath that end of the church. We were amazed to hear of the meticulous care with which the archaeologists were doing the excavation — digging it out with teaspoons. Lorna and Joe both remarked on that for some time afterward.

We also stopped at a restaurant someplace. The dinner rolls were quite amazing to me, probably very pedestrian sopapillas, they were about the size of normal dinner rolls, but they were entirely hollow, like little air pillows.

Unfortunately, I was starting to get sick by that time, so the vacation went downhill from there. I remember nausea, diarrhea, and fever; a visit from a doctor who made a house call at Lorna’s house; being bundled off in a taxi with my father who, perhaps by being a bit overprotective, had gotten into some kind of row with Lorna; and waking up in hotel room someplace else, probably Las Vegas, where we stayed for a day or two while my father took care of me. I suppose we went home soon after that. I have other memories of traveling around New Mexico with my father, but they were probably from later trips.

I was sick enough early in the fall of that year that I was sent off to Queen of Angels Hospital for observation for nearly a week. This was not an unmitigated disaster for me though. I trace my early serious interest in baseball to then. 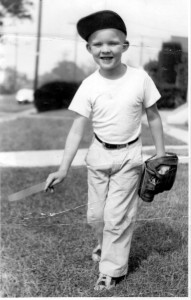 The first day of school I missed I spent with my regular sitter that year, Mrs. Hudson, where I watched the first game of the 1955 World Series on her television, the Brooklyn Dodgers versus the New York Yankees. That night, the doctor made a house call and was worried enough about me to trundle me off to the hospital. My father gave me our little Motorola clock radio to keep me entertained at the hospital. I faithfully listened to Games 2 through 6 while I was there.

I had started off Game 1, where Jackie Robinson stole home in a losing effort, rooting for the Dodgers because they seemed more colorful, the underdogs. After Game 2, when they were two games down and all the sports broadcasters were saying that no team had ever come back from being behind 2 games to none to win the series, I decided that maybe I should root for the Yankees if I wanted to be on the winning side. At the end of Game 6, the series was tied. Then the real tragedy: after Game 6 I was pronounced well enough to go back to school. I missed Game 7 entirely! To punish me for my fickleness, the Dodgers won Game 7 in a 2-0 shutout. To punish me further, I faithfully rooted for the Dodgers against the Yankees the next year when the Yankees turned the tables on them, losing the first two games to the Dodgers, but vanquishing them in 7 games, with Don Larsen throwing his perfect game in Game 5. Finally, to further humiliate me for my fickleness, the Dodgers chased away my hometown heroes, the old Pacific Coast League L.A. Angels with Steve Bilko, when they moved to L.A. in 1958.