In Arthur C. Gulliver’s description of Lilliputian Drinking Laws, the ordinary reader will have no trouble spotting that the Lilliputian word ruquat, denoting a type of Lilliputian drinking vessel, is a near anagram for the English quart, having only the “u” doubled to keep one after the “q” while simultaneously permuting it.
The more astute anagrammer may also have spotted the fact that that most exhilarating and tongue-twisting Lilliputian liquor thgbainbut is an anagram for the more pronounceable American beverage bathtub gin. 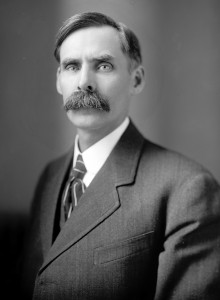 Those acquainted with U.S. history between the end of World War I and the Depression may also have recognized that the name of the Lilliputian architect of their drinking laws, Randew Olvedts, is an anagram for Andrew Volstead, author of the Volstead Act, which was the enabling legislation for Prohibition.
As might be surmised from his raucous, Bizarro parody in the Lilliputian Drinking Laws, Joseph Cunningham was no fan of Prohibition. Much of his poetry that I have from the early 1930s consists of humorous anti-Prohibition verse. I will add selections of his verse to the new Poetry section on this site from time to time. The first selection, A Famous Prohibitionist Has a Bad Dream is a poem about Andrew Volstead.
In the poem, Dry Andy is surprised by the frosty reception he receives from St. Peter when he gets to the gates of Heaven. Instead of welcoming him for his saintliness, St. Peter tells him to go to Hell for his egotism. Needless to say, the poem does not end there. In the end, even such an egotistical sinner as Andy Volstead, is redeemed by a couple of mellow whiskeys.
I’ll drink to that! 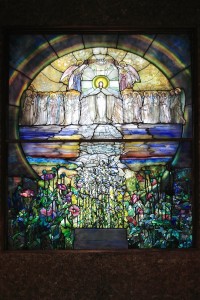 The Flight of Souls

Somehow this poem seems more than remotely topical today, May 22, 2011, a day when so many evangelicals are trying to rationalize their failure leave yesterday as they promised.
I was more than ready for them to leave.
Life on Earth might not be Heaven without the Rapchaists, but I’d be willing to try.
I think it would be a small, but significant, improvement.
But now, I suppose we will have to listen to them bemoaning the fact that they, like Dry Andy in the poem, did not get the luxury boxes in Heaven to which they thought they were entitled.
I suppose it would be too much to hope they could help out just a little down here.
They have the time now.
Blondie’s Rapture is still my favorite version.
Although maybe Dry Andy does look like a Man From Mars, eating bars, now that you mention it.